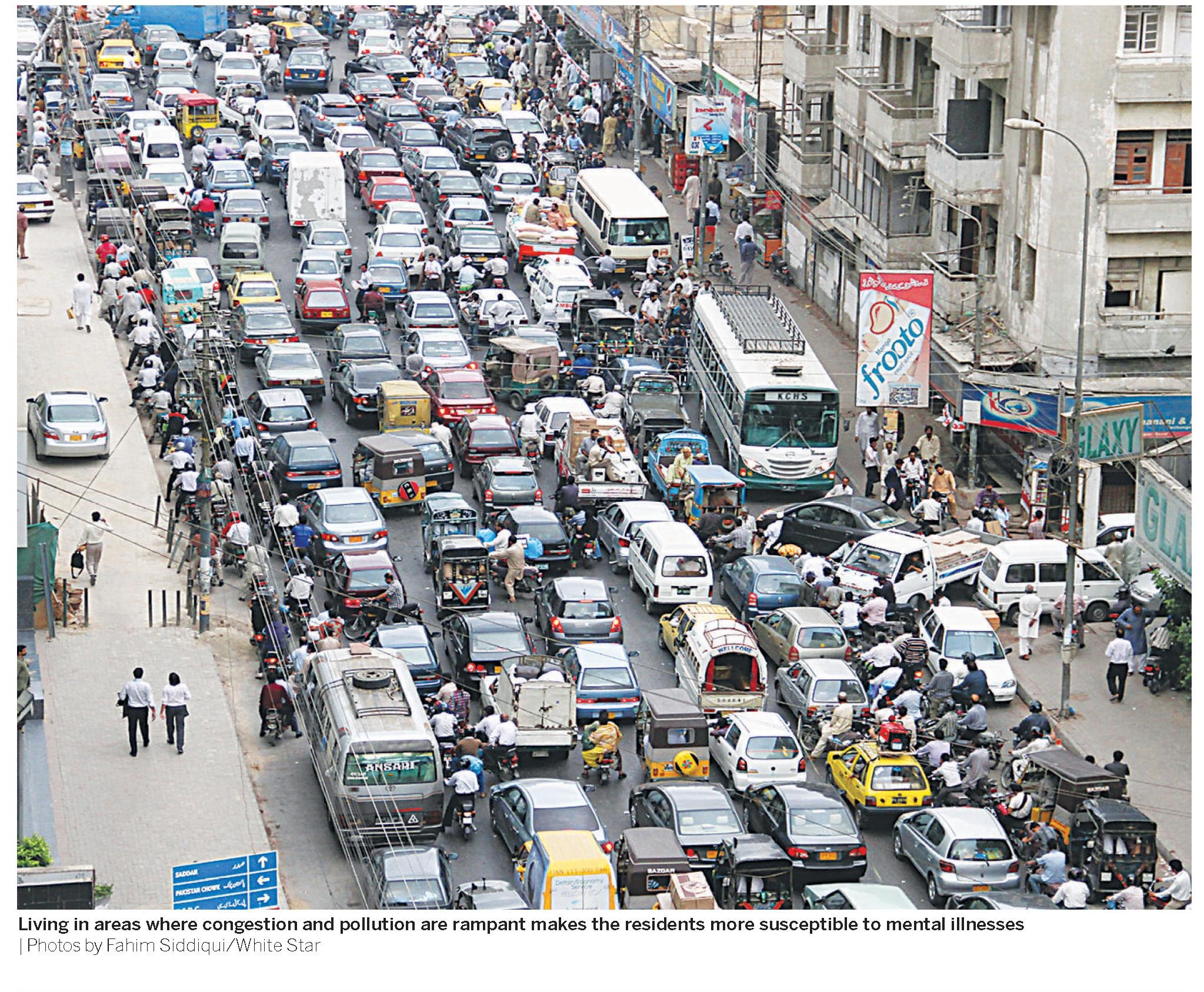 Are we losing our minds to pollution?

Living in a throbbing metropolis like Karachi, with buses rattling on roads, incessant blaring of horns, constant whirring of rickshaws, coupled with omnipotent cloud of pollution hanging over us, are things which we simply have surrendered to.
We cry over pollution – be it air or noise – well aware that it is a cause of grave health concerns. Air pollution results in aggravated cardiovascular and respiratory illnesses. Noise pollution results in seemingly trivial ailments such as sleep disturbance and annoyance and even lead to hearing impairment, hypertension, ischemic heart disease, changes in immune system and birth defects.
However, it is not just the body that is susceptible to damage by noise and air pollution. According to recent 11 years research (2001 to 2012), covering nearly two million people in Canada’s Ontario province, air pollution or noisy traffic contribute to mental disorders as well. The study was published in Lancet – one of the world`s oldest and best known general medical journals.
Among illnesses caused by pollution is dementia, a disease marked by memory loss, personality changes and impaired reasoning. Nearly 50 million people around the world suffer from dementia. About 243,611 cases of dementia were diagnosed during the study, but the risk was greater among those living close to major roads. Large population, living close to heavy traffic was associated with a higher incidence of dementia.
According to Dr Jawad Chistie, a prominent environmentalist and principal consultant at Subhe Nau, a non-profit organization engaged in conserving nature and improving public health, the link between dementia and air pollution is not something to be taken lightly `The science to prove such links is not easy and generally takes many years, if not decades,` argues Dr Chistie. `Health experts spent about a 100 years before coming up with `conclusive evidence` that smoking causes cancer. The studies to suggest the link were there, and people also knew that smoking could cause cancer, but convincing governments, and tobacco industry, proved to be extremely difficult.
The environmentalist explains that besides dementia, there are many other diseases such as multiple sclerosis suspected of linking aetiology to pollution, or more generally, environmental causes. `Common air pollutants such as PM 2.5, PM 10 and NOx (fine particulate matter and nitrogen oxide) all lead to major problems, including harmful gases that people are exposed to living near major highways,` he continues.
Previously, scientists had linked air pollution and traffic noise to low density of white matter and lower cognition. A recent study suggested that magnetic nano-particles from air pollution can make their way into brain tissue.
Professor Caleb Finch at USC Leonard Davis School of Gerontology says, `Microscopic particles generated by fossil fuels enter our body directly through the nose into the brain. Cells in the brain treat these particles as invaders and react with inflammatory responses, which, over time, appear to exacerbate and promote Alzheimer`s disease.
According to Psychiatric Dr Qirat Khan, of Aga Khan University Hospital, noise and pollution are important contributors to environment for a vital role in bio-psycho-social model of psychiatric conditions. They may cause unmasking and manifestation of psychiatric conditions such as anxiety, depression, bipolar illnesses, psychotic illnesses and may also cause agitation, irritability, and restlessness in people, especially vulnerable people.
When asked, if this is the reason doctors advise people to move to quieter areas to avoid stress, she says: `Increased workload, multi-tasking, noise and air pollution may cause mental exhaustion, stress and fatigue. Moving away from these and other stressors, along with engaging in exercises such as relaxation and meditation, may help one.
Dr Chistie also says that in Pakistan, development versus environment debate continues. `The easy answer to which is to allow people to suffer, literally die, while unabashed `development` continues. We know very well that this is actually nothing but private business interests that governments want to promote at the expense of nation’s health.
Over the years, governments and businesses have forgotten the `precautionary principle` i.e. common sense – don`t get into something that may damage health of not only people, but also other species. `It is being increasingly learnt from research that major highways may not be the answer to increasing populations and economic activity. Smaller, self-sufficient town planning, with good public transport is the way to go,` he says. WHO says three million people die yearly due to outdoor air pollution.
Increasing population and urbanisation have resulted in people living close to heavy traffic and even a modest effect from near- road exposure could pose a large public health burden. It is tragic that air pollution is not taken into consideration in urban planning and building design to reduce exposure. This might be the proverbial last straw on the camel`s back to prove why life in urban centers continues to get more stressful. We need to clean up the air, more than ever.