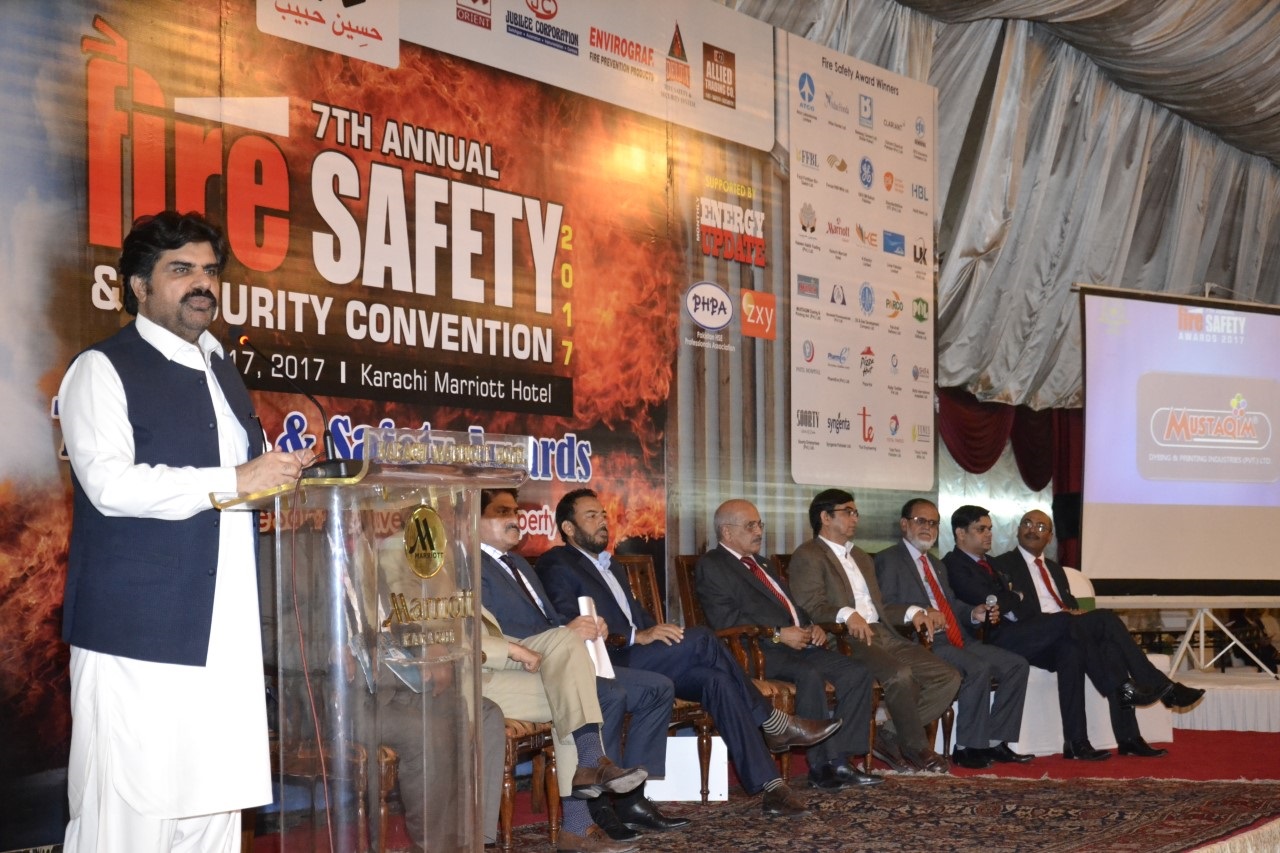 KARACHI: Sindh Information and Labour Minister Syed Nasir Hussain Shah has conceded that Provincial government’s Labour Department did show negligence in the past owing to which incidents occurred, which gravely endangered lives of labourers in industries of the province.

“But rest assured things are bound to get changed in near future as the government has started visiting the industrial units on a regular basis, issuing warning letters to negligent industries whereas strict action would be taken against officials of the department who have not been performing their duties,” said the Sindh minister while addressing as chief guest at the 7th Fire Safety & Security Convention.

The provincial minister said that slackness on the part of authorities concerned led to such undesirable circumstances under which industrial accidents take place in the past. But the Provincial Labour Department had now complete resolve to fully implement labour safety laws in industries through constant process of strict inspection.

He said that a recent step to ensure safety and security of workers and labourers at their workplace was taken when the last meeting of Sindh cabinet on 05 October, 2017 approved the proposed Sindh Occupational Safety and Health Bill-2017.

He said the proposed bill would be presented in the upcoming session of Sindh Assembly for passage.

He said that Sindh government for the first time in the country was going to convene a tripartite conference having representation of the industries’ associations, industrialists, the government, and labourers to discuss issues related to safety and security of labourers at industrial units as per standards of the International Labour Organization (ILO).

He said that provincial government had been doing its best to provide complete financial assistance package to victim families of 2012 Baldia Factory Fire incident to the complete satisfaction of ILO and other concerned international labour agencies.

The Provincial Labour minister said that Sindh government had started the process of procuring new fire engines one each for every industrial estate in the province as the concerned association of every industrial zone had assured the govt to fully meet the expenses related to operations and maintenance of the fire engines.

He said it was the shared responsibility of everyone whether the government, Labour Department, municipal agencies, non-governmental organizations, associations of industries, or industrialists themselves to ensure complete safety and protection of labourers.

Earlier in his remarks, President of Federal B Area Association of Trade & Industry M. Babar Khan said that officials and inspectors belonging to Labour Department and Civil Defence Organizations had no interest in inspecting the industries for any bona fide cause other than minting money from the industrialists.

“I myself urged several times the inspectors of Labour Department and Civil Defence to conduct emergency drills for labourers of my factory but they never showed up again to conduct any practical exercise,” he said.

President of Karachi Chamber of Commerce & Industry Muffasar Atta Malik lamented that local government agencies lacked fire fighting resources to such an extent that the city’s authorities could not handle two major fire incidents at a time.

He said that there should be a functional fire station for every group of 100,000 people in the city. Instead of having 150 fire stations the city has been doing with mere 15 fire stations, said the KCCI president.

He said that once 70 fire tenders had been available to city’s fire brigade whose numbers had now been reduced to mere 14 while only two snorkels were available to do fire fighting operation at the ever increasing high-rise buildings in Karachi.

Vice-President of Federation of Pakistan Chambers of Commerce and Industry Mirza Ishtiaq Baig said that fire fighters who lost their lives in the line of duty should be formally declared heroes and martyrs of the nation while the government should announce gallantry awards for them.

President of SITE Super Highway Association of Industries Dr. Kaiser Waheed lamented the situation that industrialists had to look towards the provincial government for doing fire fighting arrangements as the relevant municipal agencies had completely failed to discharge their responsibilities in this regard.

Prof Mohammad Masood Rafi, chairman of Earthquake Engineering Department at NED University of Engineering & Technology, said that due safety measures were not being adopted in compliance of the building codes while constructing commercial and residential buildings in Karachi.

Fawad Barry, managing-director of a fire safety consultancy firm, said the large number of buildings in a posh area in the city like DHA lacked any emergency exit as special metallic staircases could be used to create provision of emergency evacuation for occupants of such buildings.

President FPAP Imran Taj said the fire protection association had been doing its best to improve situation of fire safety measures at industrial concerns across the country.

Khalid Nadeem, vice-president FPAP and Fire Safety Advisor of K-Electric, said that data compilation and thorough investigation had never been done in Pakistan to ascertain the exact root cause of any major fire incident as the oil tanker explosion in Ahmedpur Sharqia in South Punjab was the latest instance in this regard.

NFEH President Naeem Qureshi said that NGOs like the one being run by him would continue to provide platform to hold such useful dialogues on important and unresolved civic issues of the country.

Some 30 companies were given Fire Safety Awards on basis of best fire safety and protection measures at their offices, public outlets, and industrial establishments. Sindh Information and Labour minister gave away the awards to the winning companies.