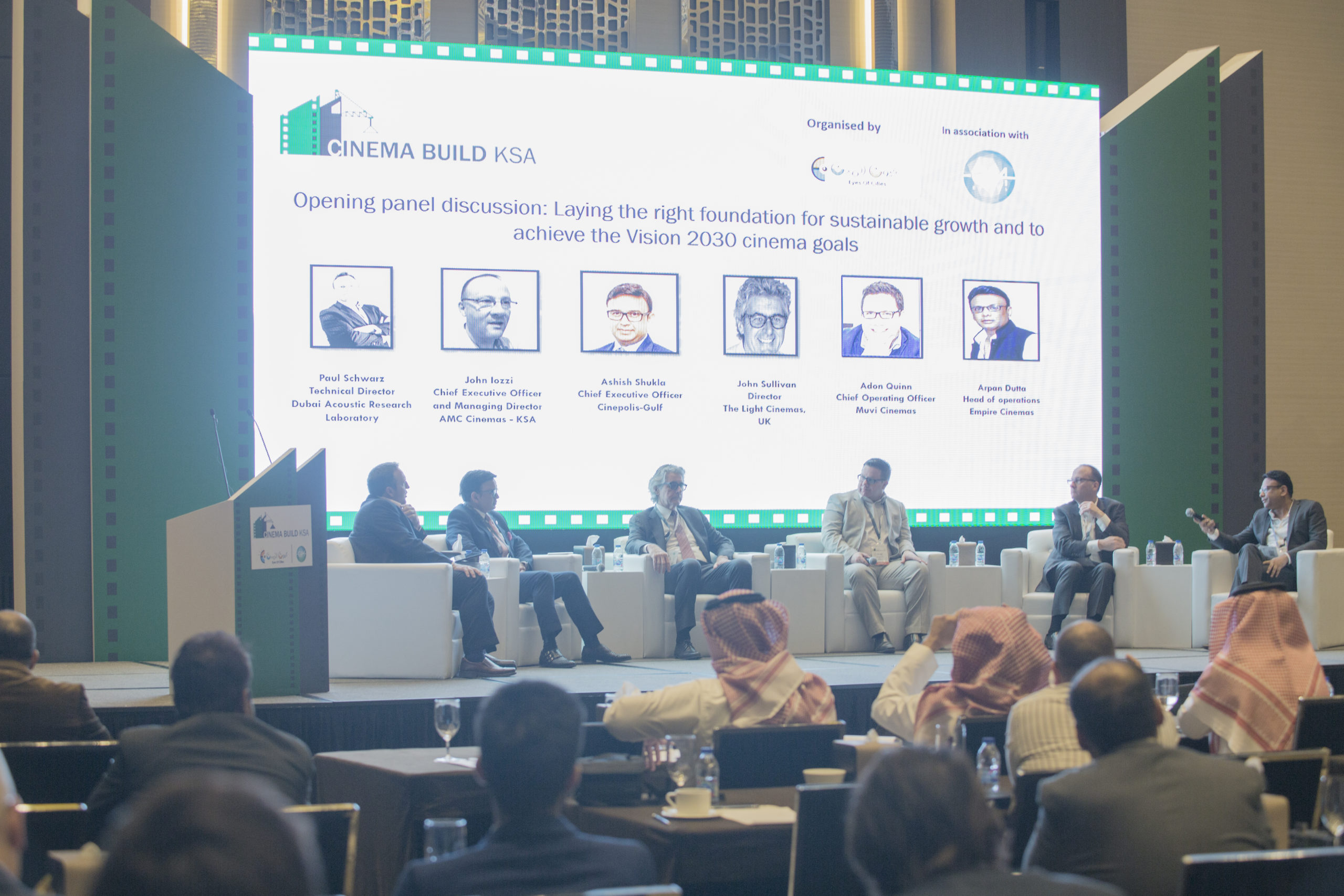 The second edition of Cinema Build KSA Forum kicked off on 19th February in Fairmont Riyadh, Saudi Arabia. The event is organised by Eyes of Cities in association with The Great Minds Group and supported by the Quality of Life Program, as one of the Saudi Vision 2030 realization programs. Building and developing the cinema sector in Saudi will for sure enhance the quality of life of individuals and families.

The agenda of the forum was designed to shed light on the most important topics related to building cinematic projects in the Kingdom while keeping pace with international standards of cinema. The event’s opening panel discussion focused about laying the right foundation for sustainable growth to achieve the Vision 2030 cinema goals. Exploring the groundwork needed to achieve both short-term and long-term goals as well as the lessons learned from the first few completed cinema projects in KSA, presenting takeaways plans for both the cinema exhibitors and regulators.

Commenting on the event the spokesperson for the Quality of Life Program, Mazroa Al-Mazroo, affirmed that the cinema sector is one of the most promising areas in the Kingdom, whether in terms of the size of the entire industry, or its economic, cultural and social impact.

Al Mazroo added: “Since the inauguration of the cinema sector, one of the initiatives of the Quality of Life Program which is one of the Saudi Vision 2030 realization programs in collaboration with the General Authority of Audio-visual Media. Nine licenses were issued to operate cinemas and 14 cinemas were opened in Riyadh, Jeddah, Dammam, Khobar, and Jizan. This has created hundreds of job opportunities and allowed millions of citizens and residents to enjoy watching premieres of their favourite movies at the same time as the rest of the world. ”

“The launch of the cinema sector is a remarkable success story in our program. The Kingdom achieved first place in ticket sales in the Middle East last January, where movies from 22 countries were shown and rated in Kingdom, in addition to that 12 of these movies were shown in the Kingdom before the United States of America. Moreover, 2020 goals were achieved in terms of the number of visits, as we exceeded 3.8 million targeted visits to cinemas in 2019. New cinemas are set to open in Jubail, Taif, Al-Ahsa, Dhahran, Hail and other cities in the Kingdom this year. ”

The forum’s sessions and discussions cover all topics related to building futuristic cinemas over two days, starting from architectural and technical considerations for designing state-of-the-art cinemas, moving to the importance of acoustics and the latest innovations used on global level. In addition to that, industry leaders and experts will exchange opinions and provide solutions for overcoming the challenges in delivering projects for numerous developers in short period well as executing projects on time while meeting required specifications and international standards.

With more than 300 attendees along with 25 international speakers as well as over 30 sponsor and exhibitor, Day one of the forum was a great success and concluded with a closing speech by the conference chairman Paul Schwarz, Technical Director, Acoustic Research Laboratory.