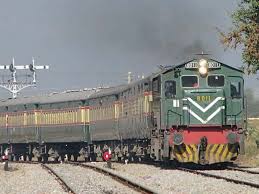 For up-gradation of existing Main Line (ML-1) and establishment of a dry port near Havelian under the China-Pakistan Economic Corridor (CPEC) framework, Pakistan Railways (PR) has decided to hire the services of national/international consultants/consortium of consultants.

Pakistan and China have signed a new framework for the revival and up-gradation of ML-1 from Karachi to Peshawar during the Prime Minister Nawaz Sharif’s recent visit to China. Initially, the financial support to PR under the CPEC was estimated at $ 5.7 billion, which increased to $ 8.2 billion after approval of the new framework. With the up-gradation of ML-1, train’s speed will increase to 160 kilometres per hour compared to the current 120km/h while train capacity would be increased from the current 32 to 171 trains per day.

The PR has planned to upgrade/overhaul infrastructure of ML-1 under CPEC framework including track, bridges, tunnels, buildings, signaling, telecommunication systems, track maintenance system, rolling stock maintenance and overhauling facilities, establishment of dry port near Havelian, besides dualisation of track between Peshawar and Shahdara.

The ML-1 extends from Kiamari (Karachi) to Peshawar/Torkham, covering about 1,750 kilometres and passing through Hyderabad, Rohri (Sukkur), Multan, Lahore and Rawalpindi stations. The ML-1 also includes the 91-km chord line between Lodhran and Khanewal and the 55km section between Taxila and Havelian. Thus, ML-1 extends over a total route length of 1,872 kilometres. The entire railway track on ML-1 is broad gauge (1,676mm or 5 feet 6 inches). The ML-1 has 196 big and small railway stations.

The selected firms will be eligible for issuance of Request for Proposal (RFP) for final selection. Final selection shall be made on the basis of quality and cost, through submission of technical and financial proposals by the firms to whom RFP has been issued.

The Joint Venture comprising M/s CREEC of China (lead firm), M/s NESPAK and M/s PRACS from Pakistan has carried out the feasibility study for the up-gradation of ML-1 railway line under CPEC.

The study was to ascertain the existing condition of the infrastructure of ML-1, and submit recommendations for up-gradation of the track and its other components so as to facilitate operations of passenger trains at 160 km/h and freight trains at 120km/h. As far as possible, the upgraded track would primarily follow the existing alignment, except where sharp curves are to be eased out or eliminated to allow higher speed.

The study was to also examine the possibility of integrated commercial development of 8 railway stations along ML-1, namely, Karachi, Hyderabad, Rohri (Sukkur), Multan, Lahore, Rawalpindi, Peshawar and Quetta for commercially exploiting the land near the stations. The passenger facilitation for these stations shall be provided during up-gradation of ML-1. Electrification/electric traction of the entire ML-1 was also to be examined and recommendations submitted for its implementation.

According to statistics provided in the feasibility study there are 195 curves of various radii on ML-1, where the track is to be upgraded for speed of 160/120 km/hr. According to the feasibility study, there are plans to upgrade 154 places so that they can meet requirements of upgrading. It is proposed to provide speed-restriction for passenger trains on the rest of the 41 places for the time being as they are located in the entrance and exit ends of stations and in areas with concentrated city buildings.

There are 747 existing level crossings along ML-1, including 495 manned ones and 252 unmanned ones. For the safety of the travelling public and to avoid any major catastrophe in future, it is advised to eliminate all level grade crossings on the upgraded lines.