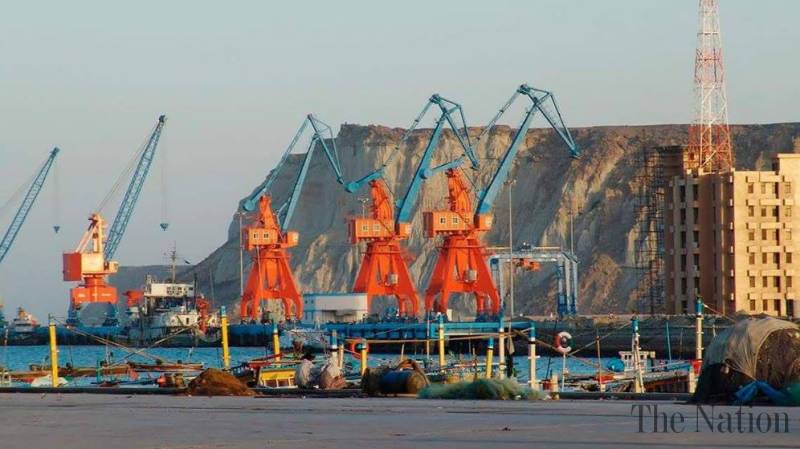 Gwadar Port Free Zone Business Centre is working to have 16 units including five industrial, three trade and eight others relating to services including insurance and banking, both by Chinese and Pakistani companies.

He said that Pakistan would get a new driving force for economic growth with up to 2-3 percent growth in GDP, and this will remove bottlenecks in economic growth (energy shortage and poor transport infrastructure). He said that business activities would create new jobs, energy security, modern transport infrastructure, maritime development, trade and commerce, agriculture/water, industrial growth/supply chain, tourism, and human resources development.

During the visit of five-storey Gwadar Free Zone business centre, which is in final stages of completion, he showed various apartments of the centre. There has been established one window operation centre as well. The officials of all relevant departments including finance, Federal Board of Revenue (FBR) and others will sit together and complete documents for investors under one roof, he said.

He said that conference rooms have been established for the facility of investors. He said that at present two major projects are underway; one is Business Gwadar Port Authority Complex and other is Free Zone Business Centre. He said that a total of 2,500 people are working, including 2,000 Pakistanis and 500 Chinese. A big building of Free Zone business centre has been built in a short period of five months and most of Chinese technical people are working there. They are also giving training to the local people. They also started first phase of training of local people in China Pakistan Vocational Technical Institute. This institute is part of free zone and requirements of technical people would be fulfilled from it. Chinese investment in Gwadar is almost touching $2 billion during the last three years. Gwadar is pillar of Chinese and Pakistani investment in infrastructure, energy, transport, industrial cooperation, social sector and human resource.
Talking to the journalists, Director General of Gwadar Development Authority (GDA) Dr Sajjad Hussain Baloch said that the federal government has planned to establish storage centre of oil at Gwadar at an estimated cost of Rs 10 billion under China-Pakistan Economic Corridor (CPEC), adding this oil city would consist of 80,000 acres.

Total area of Gwadar Model City is 290,000 acres of land, which includes 160,000 acres of residential area while the remaining is for industrial purposes. A Chinese company is working on the Model City Plan and it will be ready by Aug 14, 2018.