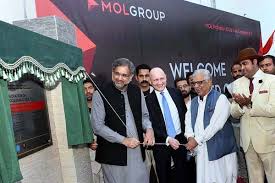 Tolanj Processing Facility, a gas processing plant that will further enhance gas supplies to the North of Pakistan including Khyber Pakhtunkhwa is inaugurated by Prime Minister Shahid Khaqan Abbasi.

MOL Pakistan has completed the commissioning of this gas processing facility at a cost of $ 15 million. The Tolanj Processing Facility has a remarkable production capacity of 20 million standard cubic feet per day and is expected to contribute annual revenue of $ 31 million to Pakistan’s economy. The processing facility was commissioned on December 5, 2017, commencing production from Tolanj X-1 and Tolanj West-1 gas wells.

Speaking on the occasion, the PM lauded the role of MOL Pakistan in meeting Pakistan’s energy requirements. “Over the years, MOL Pakistan has made valuable contributions to promote investment and employment opportunities in Pakistan. This is a classic example of Public Private Partnership. I encourage other business groups, corporate entities, foreign investors to follow the course as Pakistan is fast becoming an ideal entity for investment from the business point of view,” the PM said. “The facility is a major headway in meeting Pakistan’s growing energy demands,” he added.

“For two decades, MOL Pakistan has been playing a proactive role in Pakistan’s oil and gas sector, it has been contributing through its finds that help to mitigate energy crises in the country. With the launch of Tolanj Processing Facility, we look forward to making more large-scale investments in Pakistan and with the cooperation of the government of Pakistan,” he said

Graham Balchin, MD/CEO of MOL Pakistan said on the occasion, “For us, successful operations of this processing plant stands at utmost importance. After thorough inspections, re-testing and replacement of several components, Tolanj Processing Facility has started operations.

All these measures have given confidence to the stakeholders for safe, sustainable, long term operations of this facility. Our project team deserves the highest accolades for this great achievement.”

Petroleum Minister Jam Kamal said the Tolanj Processing Facility is a milestone for the people of this region who would reap the benefits of this facility for a long time to come.

“Our government, under the visionary leadership of Prime Minister of Pakistan, is determined to facilitate the companies that invest in the energy sector and help secure Pakistan’s long term economic future.”