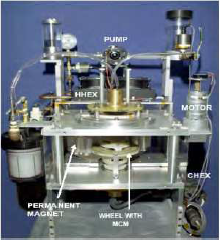 A new frontier in cooling technology

Magnetic refrigeration is a modern, energy efficient and environmentally friendly cooling technique based on the magnetocaloric effect of magnetic materials. It has been employed to achieve very low temperatures and it does not involve any harmful ozone depleting gases as in the case of conventional vapour compression refrigeration systems. Active magnetic regenerative (AMR) systems have been used to enhance the heating/cooling performance of magnetic refrigerators. This research work presents a review and analysis of the major experimental and numerical advancements made in the field of magnetic refrigeration.

Introduction
Magnetic refrigeration is a newly developed and emerging cooling technique which is based on magnetocaloric effect of magnetic materials to produce cooling/heating. The magnetocaloric effect of magnetic materials was firstly noticed by Warburg in 1881 (Bohigas et al. [1]). He observed that the temperature of iron piece increased when it was brought to the external magnetic field and it reduced when the piece was taken away from the magnetic field. The materials which possess this property are known as the Magnetocaloric materials (MCMs). As compared to vapour compression systems, magnetic refrigeration is an environmental friendly and energy efficient cooling technology (Gschneidner Jr and Pecharsky [2]). Very low ranges of temperatures have been achieved by using the cooling technology of magnetic refrigeration. It gives more theoretical cooling efficiency when compared with conventional vapour compression refrigeration systems (Zhang et al. [3]).

Working Principle of Magnetic Refrigerator
A typical magnetic refrigeration cycle usually consists of four major stages of processes which are shown below in Fig. 1 and described in the following; (a) magnetization: the magnetic field strength is increased causing magnetic entropy to decrease which further increases the temperature of MCM; (b) cold blow: some heat transfer fluid is employed to absorb the heat from the MCM to cool it down to the ambient temperature; (c) demagnetization: the magnetic field intensity is decreased causing magnetic entropy to increase which further lowers the temperature of MCM; (d) hot blow: again a heat transfer fluid is used to reject the heat to the MCM increasing its temperature and thus the cycle goes on.

Experimental research
This section covers the major experimental work that has been carried out to improve the cooling performance of magnetic refrigerators. Very first magnetic cooling system was developed by Brown in 1976 (Brown [6]). He used an electromagnet to generate the required magnetic field with an intensity of 7T. Gadolinium plates were used as the refrigerant and water with alcohol was employed as the heat transfer fluid. This system obtained a temperature span of 47K after 50 operating cycles. A team from the “Polytechnic University of Catalonia in Barcelona” developed a magnetic cooling mechanism as shown below in Fig. 3 (Allab [7]). A disk with a gadolinium ribbon was used as the magnetocaloric material. The disk rotated in the magnetic field which provided the magnetization and demagnetization. They achieved a temperature span of 1.6K and 5K with a magnetic field strength of 0.3T and 0.95T respectively. The achieved temperature span was not much higher but the device was important in the aspect that it showed the feasibility of using permanent magnets to produce the desired magnetic field.

“The Astronautics Corporation in Madison” developed an active magnetic regenerative magnetic refrigeration system, as shown below in Fig. 4, having a wheel which consisted of 6 beds of gadolinium powder (Engelbrecht et al. [8]). The wheel rotated in a magnetic field of 1.5T. They achieved a temperature span of 4K and 20K with an operating frequency of 0.16Hz and 2.0Hz respectively.

Fig. 4 Magnetic system developed by Astronautics Corporation in Madison (taken from Zimm et al. [9])
In the same way, many other experimental setups of magnetic cooling systems have recently been developed including a prototype developed by G2ELab (Clot et al. [10]) and the magnetic refrigeration system using Halbach array of magnets developed by Tura and Rowe [11] in 2007.
Numerical Modelling
The mathematical or numerical approach along with the experimental has also been used to investigate, optimize and improve the performance of magnetic refrigeration systems. Nielsen et al. [12] have reviewed the important numerical models of room temperature AMR devices developed till 2010. The effect of various parameters like magnetocaloric effect (MCE), governing equations, profiles of magnetic field, fluid flow behaviour and thermal conduction on the performance of room temperature AMR devices have been studied and analysed in detail. Tušek et al. [13] developed a time dependent, 1D numerical model to analyse the operation of AMR refrigerator. The software package MATLAB has been employed to solve coupled equations for magnetocaloric material and the heat transfer fluid. The numerical model can be used to analyse various parameters like magnetic field strength, layered and single AMRs. Lei et al. [14] presented the simulations for multi-layered AMR using La(Fe,Mn,Si)13Hy. A very careful selection of working temperature and number of layers is required because the said material gives a sharp and large isothermal change in entropy. Fig. 5 shows the variation of cooling power with the number of layers of MCM. The authors have used a one dimensional numerical model to determine the influence of temperature span, working temperature and number of layers.

Fig. 6 Variation of cooling capacity of micro-channel AMR with; (a) Utilization factor; (b) Operating frequency