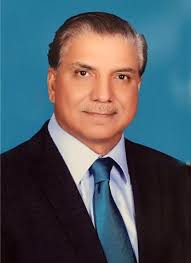 Terming Sindh’s concerns on Kalabagh dam genuine, Chairman Water and Power Development Authority (Wapda), Lt-General Muzammal Hussain (retired) proposed that if a consensus evolves on the dam within political forces, then it should be built but its operation should be handed over to Sindh aimed at addressing its concerns.

He made these comments before the Senate Standing Committee on Water Resources. The meeting was presided over by Senator Shamim Afridi.

Talking about long-term hydropower projects, Chairman Wapda said that Kalabagh dam should be constructed if provinces show their consent, adding that consensus is necessary prior to taking any initiative on it. He cited a report by Qamar Zaman Shah in which a couple of recommendations were made: (i) there should not be any link canal on right or left side of the reservoir; (ii) there should be authentic statistics of sufficient water availability to fill the reservoir as river Kabul, river Swat and Sindh residual will fall in the dam; and (iii) Management and O&M of the dam should be handed over to Sindh.

Chairman Wapda acknowledged that the concerns of Sindh are genuine, that in case the project is established Punjab will not get its share. He said the height of the project has already been slashed by 10 per cent to address KPK’s concerns adding that with the establishment of Mohmand Dam (old Munda dam), the apprehensions of flooding in Mansehra and Naushera will be addressed. However, he added that this controversial project should be left to the political government.

“Wapda is the executing agency. If provinces evolve a consensus, we are ready to start work on the project and if consensus is not reached, we will not start work. We are constructing Diamer Bhasha and Mohmand dam,” Chairman Wapda added.

He said if Pakistan continues to progress at the current pace, it will face serious water security issues. Presently, Pakistan is amongst 15 most water stressed countries.

Chairman Wapda said that he is in this position for the last one and a half years and added that it was the country’s bad luck that planning is being undertaken by the Islamabad-based Planning Commission. He maintained that the Executive Committee of the National Economic Council (ECNEC) approves the projects and Planning and Development Division disburses every rupee with all other departments like Wapda merely executing agencies.

He contended that the world’s top five companies make fools of us because Pakistan does not have local consultants. The National Engineering Services Pakistan (Nespak) was once the world’s leading consultancy firm but it has been destroyed due to nepotism.

“Presently Pakistan does not have a local consultant firm. In Nespak 921 officials are hired on political basis who don’t know their work. When Nespak was part of Wapda, it was one of the world’s leading consulting firms. For God’s sake, don’t undertake hiring in these companies on the basis of political affiliations, the country will be destroyed that way,” he added.

Chairman Wapda further stated that European Companies are not coming to Pakistan on the plea that the Chinese companies are getting all the contracts in connivance with the Pakistani officials.

He argued that if Pakistan does not establish reservoirs of 10-15 MAF during the next 10-15 years, the situation will go from bad to worse.

Chairman Wapda informed the committee that Rs 80 billion has been spent on Daimer Bhasha dam and 13 people have been killed so far as the result of differences between KP and Gilgit Baltistan. However, work will start on the project next year as Ecnec has accorded its approval.

Any country that has 1000 cubic meter water available per capita is categorized as a water scarce country and per capita water availability in Pakistan at present in 903 cubic meters. This average per capita water availability was around 5000 cubic meters back in 1951. The committee was told that out of 35,409 Million Acre feet (MAF) reservoirs in the whole world, 1,577 MAF are in South Asia and only 145 MAF in Pakistan. Chairman WAPDA in his briefing told the meeting that 25-35% of our water comes from rains and 65-75% from glaciers in the Northern areas.

He observed that 60% of our population is directly engaged in agriculture and livestock and despite being included in 15 most water scarce countries, Pakistan has one of the most water intensive agriculture system with fourth highest use of water rate. 90% of country’s water is used in agriculture and the need of the hour is to raise this matter at the level of the Council of Common Interests as to how overuse of water in irrigation can be reduced and use the same for domestic needs.

Talking about the Indus Cascade, he termed it the most precious asset for the country. He stated that the Indus enters Pakistan at an altitude of 8430 feet and gives us a drop of 7030 feet till Kalabagh at an altitude of 1400 feet giving multiple sites along the stretch for building reservoirs and run of the river projects.

The committee was given an account of the projects under process by Wapda which include Kachi Canal (PH-1) commissioned in September 2017, NaiGaj Dam to be completed by June 2019, Muzaffargarh& TP link Canal to be completed by June 2019 and RBOD-I and III to be completed by November 2019. RBOD-II is to be worked upon by the Sindh government and not WAPDA. The Committee was given details of short-term, medium-term and long-term water reservoirs and run of the river hydro power projects to meet futuristic needs of the country. These include reservoirs and hydropower projects in NaiGaj, Naulong, Bara, Tank Zam, DiamerBasha, Mohamand, KurramTangi II, Chiniot, Shyok, Dhudhnial, Skardu, Akhori, Rohtas and other small and big dams.